According to Boris Perchatkin, a religious human rights activist and prisoner of Soviet camps, there are about 500 thousand Slavic Christians in the United States who left the USSR and the CIS countries due to religious persecution. Most of them settled in progressive and predominantly democratic states, settling in cities such as Sacramento, Vancouver, Seattle and Portland. Having arrived in their new homeland a couple of decades ago, many of them did not think at all about the political influence on American society – they had to support and feed their families, most of which were large and partly kept afloat thanks to social security. Now, when immigrants are firmly on their feet, some of them are thinking not only about working in the real estate, transport and service sectors, but are running for political offices, both county and state.

With enviable energy, a group of young evangelical Christians visit principally Pentecostal (traditionally non-electoral) churches of the Northwest in order to get as many supporters as possible. The group makes recommendations on the main candidates and explanations in Russian.

The founders of the organization are Dima Sashchenko, a native of Belarus, and his partner, an American of Ukrainian origin, Andrei Georgiev. The first one is a food business entrepreneur, and the second one is a youth leader in the Smirna Slavic Pentecostal Church in Vancouver, Washington. Their organization consists of 9 members and a dozen volunteers, financial support of the organization comes entirely from local business donors.

“According to some statistics data, up to 150 thousand Russian-speaking residents live in the Vancouver and Portland region. There are a lot of us, Christian Slavs, here. We want the voice of our community to be heard by the legislators. Here in the United States, unlike the Soviet Union, where we and our parents came from, citizens are given the opportunity to choose their government. If good people do not vote, then there will be evil people who will vote for us,” said Andrei Georgiev, representing the Slavic Vote organization at The Fathers House Church in Vancouver.

Georgiev speaks about family values ​​that are popular among the Slavic population of America, urging from the church pulpit to vote for the respective candidates: “Our goal is to bring Christians to political positions because, as the Bible says, we are the light of the world.”  “We were prompted to this activity by the pernicious passivity of the Slavic religious population. We can say that it was an impulse from God,” Dmitry Sashchenko said in an interview with “Slavic Sacramento”.

Dmitry considers himself a dedicated Christian and attends the New Life Missionary Church in Portland. Dmitry is not opposed to working with representatives of the Democratic Party, and even tried to present them on his platform, however, according to him, the Democrats “have little interest in Slavic voters.” For a year and a half of its existence, Slavic Vote has held about 60 events in the churches of the region.

“The activation of the Slavic population in our region began with last year’s protests against compulsory vaccination in Oregon and Washington. Also, people were unhappy with the sexualization of school education. This also served as a trigger for the consolidation of religious immigrants,” Dmitry shares his observations.

End of September, in one of the Slavic churches in Salem Slavic Vote presented Russian Old Believer Anna Kasachev, who is running for the Oregon State Assembly. According to Kasachev, whose parents fled to the United States from Russia in the middle of the last century, she is the first Russian-speaking candidate to run for the highest legislature of Oregon.

“As a member of a community that came to America for freedom, we are extremely shocked to see the changes in the Oregon Legislature. The politicians who, as I hoped, would serve and protect us seem to be more interested in self-defense,” Anna says in her campaign program.

Anna is an Orthodox Christian and stands for conservative family values, for full opening of businesses and churches during the pandemic. Anna introduces herself as a “politician from the people” and is running for election to the Oregon House of Representatives to represent District 22. It is worth noting that this district is inhabited by a large number of Old Believers, immigrants from Russia.

“We came here 60 years ago and we have never participated in elections, in politics, we have never voted, we asked the government not to touch us and we did not strive for politics ourselves,” Anna said, speaking at one of the state’s Slavic churches.

Anna Kasachev endorsed by the Republican Party and she is competing with the current Oregon Assembly member, Democrat Teresa Alonso Leon.

A resident of neighboring Washington state, Anton Sakharov, ran for the governorship with the support of the Republican Party. He recently presented a commercial in which he said that as a victim of the Soviet socialist regime, he couldn’t watch how the state transforms into a kind of “socialist camp”.

“We grew up in the Soviet Union and in Russia. It didn’t matter how hard you worked – you still got the same wage as your partner, who did nothing. My parents had doctoral degrees, and they had to queue for hours for milk,” the immigrant shared his family history. “My father brought me here as a Jewish refugee when I was 11 years old.”

“Every time I come across government control, I see something that I know very well, because that is what is called socialism. I am grateful to this country and I don’t want to let it go to something that is not working – to socialism. As a husband and father of three children, I want my children and yours to continue living free lives,” concluded the first Russian-speaking candidate for governor of Washington State.

According to the candidate, Washington state needs “less government, less taxes and less bureaucracy.” It should also “improve transparency and accountability, restore law and order by supporting the police”. In addition, the young politician wanted to end drug-induced homelessness.

Sakharov dropped out of the race after losing the primary on August 4, 2020. Three dozen candidates competed for the governor’s seat, but only two made it to the finals – current governor Democrat Jay Inslee and his contender Republican Loren Culp.

Whether Anton is a descendant of the academician, nuclear physicist Andrei Sakharov, who devoted his life to fighting for freedom of speech in the Soviet Union, is unknown. He did not respond to Slavic Sacramento’s request for an interview.

In Sacramento, where, according to various sources, from 50 to 150 thousand people from the CIS live (most of whom fled to America because of their religious beliefs), and there are about 100 Slavic churches with a total number of over 35 thousand parishioners.

Shortly before the elections in the capital of California, a political group of Slavic immigrants was created, promoting representatives of the Republican Party in various representative bodies of the state and country.

One of the activists of this socio-political trend is a young native of Russia Timothy Yanovsky. He heads several Russian-speaking groups on Facebook, in particular – the Russian-Speaking Society of America, Russian Speaking America, etc. In the past, Timothy took part in organizing in Seattle numerous processions in honor of the victory of the Soviet army in World War II. Timothy stands for peaceful cooperation between the United States and Russia.

In September, he and his supporters held a meeting of Russian-speaking voters with US Congress candidate Chris Bish in Sacramento. Bish is a real estate agent, who is running for the 6th congressional district in California with the support of the Republican Party. It is the district with the largest concentration of religious refugees from the USSR and the CIS. In April Chris Bish filed a federal lawsuit against California Governor Gavin Newsom, demanding to stop what she believed to be dangerous experiments with the state’s economy.

In addition, Bish calls for the end of lockdown, for reopening of churches and a significant lifting up of restriction rules.

When addressing the Slavic population of this district, Chris appeals to the historical negative past of religious immigrants. “Anyone who has lived under the tyranny or communist rule, you know what it is. I’m here to fight for your rights, I go against the state authorities in the fight for our freedoms,” Bish claims.

It is worth noting that since the start of Trump’s nationwide presidential campaign, many Russian-speaking groups on Facebook have appeared to support him, with a total number of participants up to 15 thousand, while the groups for the Democratic party and their candidate Joe Biden count only a tenth of this number.

While political gatherings in Sacramento become more and more popular, another immigrant from Belarus – Aleks Kuzmenko – is gathering hundreds and thousands of Trump supporters in Idaho and Oregon. His high-profile events take the form of auto rallies and gather thousands of conservative Americans.

“I urge you to vote for Trump because his actions are consistent with his words,” Kuzmenko says. “There is no sugary political correctness in him.”

Kuzmenko does not have a political background, however, this did not prevent him from organizing the largest rally in support of Trump and conservative values in Portland at the end of August. Recently, the American press tried to hint at his possible cooperation with the Russian authorities, however, the activist denies any foreign interference. According to Kuzmenko, all events take place exclusively on a volunteer basis and thanks to the activism of Americans.

“The school must be different”

Another notable example from the Slavic community is clinical psychotherapist Riah Skrinnik from Sacramento. Skrinnik has extensive experience working for state positions in California. Currently she is running for the San Juan Unified School District School Board.

Riah, a religious immigrant from Ukraine, is critical about the initiatives of local authorities in relation to general education and does not agree with many innovations and procedures in public schools in the Sacramento region. In particular, the Russian-speaking candidate opposes the dominance of LGBTQ ideas at schools, advocates caring for students from low-income families, she stands for re-opening schools and for reforming public education.

“Our task is to fight for the purity of our children. We are responsible for education of the thousands of students who will rule this country tomorrow. But it seems that very few people think about it today … so, of course, I will be an inconvenient candidate here,”  Skrinnik shared in an interview with “Slavic Sacramento“.

Why evangelical Slavs are voting for Trump?

Pastor of the Russian-speaking branch of the Father’s House Church in Sacramento, a native of Belarus, Vlad Yarmolyuk, expressed the opinion about Trump of the majority of religious immigrants in a conversation with the “Slavic Sacramento”:

“Donald Trump stands for family values, against abortion… Trump’s ideology is close to me, so I definitely will vote for him,” says Pastor Vlad.

Reasoning about dangers in the era of coronavirus, scandals about the alleged financial machinations of the Trump family are cared by believers much less than unconditional support of the church from the President. Trump’s peremptory judgment and his charisma overshadows all his failures and faults in the eyes of the Evangelical Slavs. 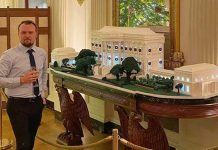 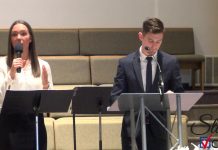