For the past three years, “Russian House #1” on the Russian river has won over the hearts of Americans, as well as immigrants from post-Soviet Republics.

On the shore of the second longest river (after the Sacramento river) in the San Francisco Bay area, the unique Russian restaurant has been successfully working for the past three years, where instead of fixed prices, visitors can pay “on conscience”.

As previously reported by Slavic Sacramento, the idea of creating the restaurant started after St. Petersburg natives,Tatyana Ginzburg and Polina Krasikova, took a trip to California. After studying the state’s history and their association with Russia, they came to a decision to open a restaurant in a Russian style.

“We found this restaurant by accident,while we were on the way to Fort Ross from the festival of “Burning Man” and we were really surprised by the Russian history on the shores of the Russian river,” Polina Krasikova says. “We conceived to open the “Russian House” – a cultural spiritual concept that would bring here a piece of modern Russia. How to do it? Just food is not enough, since in Russia, conversation at the table is also important. We invite friends to talk. There are no standard rules.”

Indeed, to find another similar place would be hardly possible on both sides of the ocean. At the entrance you can see a cast-iron pot in Russian style, where Russian visitors leave their gratitude in US dollars. Despite the fact there are no waiters as in traditional restaurants (the “Russian House #1” is self-service in the style of a buffet, and all employees are volunteers), the menu here is constantly changing and can compete with the best restaurants in this area. Also – by prior arrangement with the owners – there is an opportunity to cook your favorite meal, which may be included in the restaurant’s book of recipes.

By the door is a silhouette of a Russian peasant in bast shoes, on a decorative Russian stove is a chocolate with Putin’s image, and behind the massive wooden tables sits hungry travelers, many of whom came here for the annual Russian festival at the historic fortress of Fort Ross.

In the beginning of the 19th century, the Russian Empire equipped an expedition to the present-day San Francisco Bay Area. Travelers, headed by Ivan Kuskov, who, exploring the area of the Bay of Rumyantsev (now Bodega Bay), built the fortress of Fort Ross. Then, three Russian ranches were built here that grew agricultural products for a Russian-American company, traded with the local population, and supplied Russian seafarers with wine, tobacco, wheat, and other supplies.

Two hundred years later, other Russians came to the shores of the Russian river, with another economic model.

“Being an economist, I, of course, at first doubted whether this would work, but that made this experiment more interesting,” Krasikova comments. “As you can see, the restaurant is flourishing, people are returning, and more and more new people are coming here because of our concept.”

In the last century, the Russian pioneers came to America, turning natives to orthodoxy and trading with the local population, and today, Russian businesswomen – Tatiana Ginzburg and Polina Krasikova – conquered the hearts of Americans with the breadth of the Russian soul, cuisine, and universal contemplation.

According to Krasikova, the restaurant part of the enterprise has already gained sufficient popularity, and the managers are moving in a philosophical direction, seeking to develop themselves internally. This is facilitated by numerous meetings with famous contemporary thinkers from Russia and the United States and, of course, musical and creative nights from local bands.

For three years of the “Russian House # 1’s” existence, it has won over the hearts and stomachs of Californians, who flock in crowds from all over the state to taste the Russian-American cuisine. Convinced of the popularity of Russian dishes and feeling the lack of guidelines for their preparation in America, Polina and Tatiana announced a fundraiser on the Kickstarter crowdfunding platform, where you can pre-order an exclusive collection of recipes.

“Traditional recipes in our country have been greatly transformed, because they were influenced by local products: kale, mushrooms and greens,” concludes Polina Krasikova. “Here my creativity has found a real expression.”

Today, for example, in “Russian House # 1,” the menu includes Olivier Salad with pineapple, turkey with local cranberries and mushrooms, and cabbage soup that has been prepared from kale instead of ordinary cabbage. 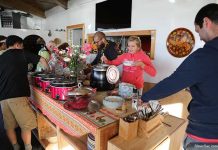 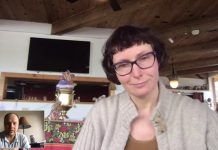 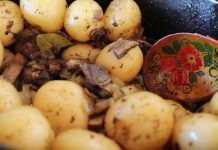