The Embassy of California just opened in Moscow, while back in America there are numerous scandals about Russian government interference with US politics. A Slavic Sacramento journalist visited the office of the “Independent Republic of California” and asked the Golden State’s secessionist leader a few questions.

The Embassy of sunny California in Russian Federation occupies a small office in a concrete building on the outskirts of Moscow designed in the Soviet Brutalism architectural style. This unofficial embassy is located on the street named after Klara Zetkin, a German Marxist activist. The embassy shares the building with the Antiglobalization Movement of Russia..

A member of the Antiglobalization Movement, who introduced himself as Edward, told me that during Soviet times the building was occupied by the Chemical Industry Institute. In the Cold War days the institute designed chemical weapons for the Soviet Army. Indeed, on the walls of you can see old bulletin boards dedicated to the then-latest achievements of the USSR’s chemical industry.

Today America’s mass media reproaches the California secession movement for suspicious ties with pro-Kremlin organizations such as the Antiglobalization Movement of Russia. For instance, Yes California leader Luis Marinelli recently attended an international forum where representatives of the self-proclaimed Luhansk People’s Republic and Donetsk People’s Republic could be seen together with secessionists from Texas, Hawaii and Puerto Rico.

To enter the California Embassy, first you have to go through a checkpoint with a brightly colored barrier, then walk up the porch, go past the diner on the first floor, show your passport to the guard,and finally go to the third floor where the Embassy is located.

“Ah, you are going to the Globalists” – the guard in the glass booth checks my name and gives me a pass.

Then a “globalist” intercepts our group of journalists and escorts us through the dark corridors of the building.

The famous Embassy of California in Moscow occupies a tiny room. It looks like a recreation room in a Soviet-era House of Culture. The walls are adorned with posters depicting several major counties of California, including Monterey and Sacramento. The only desk in the room accomodates a projector which throws a picture of California’s white and red flag onto the opposite wall. The nearby conference room is shared by the Embassy of California and the Antiglobalization Movement of Russia; its walls are decorated with a mix of antiglobalist banners, posters of Eric Garner and Michael Brown, and quotes by gay activist Harvey Milk.

The Antiglobalization Movement of Russia

The Antiglobalization Movement of Russia is a non-governmental organization which advocates complete national sovereignty for all countries of the world. The sovereignty of Russia itself as an independent player on the political, economical and cultural arena is its highest priority. 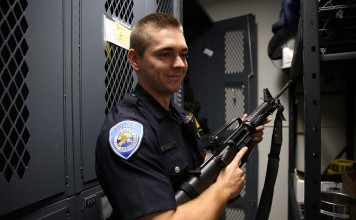 “The Antiglobalization Movement of Russia supports countries and peoples who are opposed to the dictates of a unipolar world and seek an alternative agenda. The movement advocates for the development of international cooperation and solidarity […]. Today, every effort should be made to stop the most devastating manifestations of the “new world order”: the barbaric exploitation of the majority of the world population, the suppression of national sovereignty, the destruction of the spiritual foundations of society, and the suppression of the sovereignty of individuals by means of total electronic control,” says the organization’s website.

It is remarkable that President of Syria Bashar al-Assad is among the honorary members of the Antiglobalization Movement of Russia.

The purpose of the movement is “to promote all aspects of the national security and traditional moral values”.

The Antiglobalization Movement is financed with private donations and grants from public organizations created by Russian president Vladimir Putin.

It was the Antiglobalization Movement who paid for Yes California’s office room in Moscow. The Movement’s president Alexander Ionov does not deny that.

Yes California’s leader Luis Marinelli is also convinced that “why not work together if our current goals are common”, although he vehemently denies accusations of collaboration with the Kremlin. Marinelli works as an English teacher in Yekaterinburg. The idea of California’s secession came to him about three years ago. At first this seemingly insane initiative did not look promising, but with Donald Trump’s rise to power, more and more Californians have considered establishing a country of their own.

A third of California’s population supports secession from the US

According to Marinelli, about a third of Californians support the idea of secession. Initiating a referendum on California’s secession requires at least 600,000 signatures, and today about 8,000 volunteers across the state are gathering the necessary signatures. 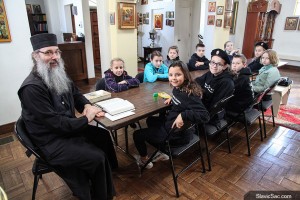 “There are more than 40 million people in California. The state grows lots of food and supplies the entire country”, says Marinelli. “The population of the state is comparable to that of Poland. California’s economy is more powerful than the economy of countries like France and, frankly speaking, Russia. These are all prerequisites to forming an independent country.”

This past January, the Office of the Attorney General of California approved the “Calexit Initiative” for the 2018 ballot.

“There are great examples of fighting for human rights and liberties in the history of California”, added Marinelli. “When we are an independent country, we will displace the United States from the pedestal of the ‘World freedom fighter’ because they have failed in their mission.”

Americans are narrow-minded in general, says Marinelli. According to him, his compatriots are not ready to accept the fact the United States’ healthcare and education systems are not the best. Instead, the US government is proud of its world leadership and the “military bases all around the globe, especially near the borders of Russia”.

When asked whether an independent California could survive without a source of fresh water, the state often suffers from lengthy drought periods, Marinelli suggested Californians could get water from other states in exchange for the food grown in abundance by Californian farmers.

California’s Governor Jerry Brown, whose portrait hangs on the office wall along with Bashar el-Assad’s, supports the state’s self-determination movement to a degree. He has confirmed that “California is more of a country than a state”.

Luis Marinelli also spoke of the hatred and discrimination “by white Americans toward Muslims, immigrants, and other non-Americans”. 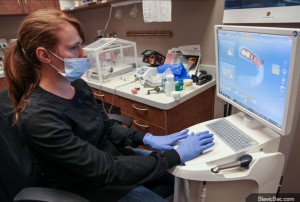 SPONSORED: A New Tooth, Made in Under an Hour

This is why Marinelli cooperates with the Antiglobalist Movement of Russia “to bridge California and the US with Russia” outside the Washington’s context.

According to Marinelli, the secession is a “divorce of the modern and open California from the more traditional and narrow-minded states” that do not approve of transgender bathrooms or same-sex unions.

The Antiglobalization Movement of Russia leader Alexander Ionov agrees with Marinelli that Donald Trump and his anti-immigrant policies betrayed the values that made America the country we know.

Meanwhile Marinelli and the Russian antiglobalists are complaining about their image being tarnished by both liberal journalists and their conservative colleagues.

In the past election Marinelli voted for Donald Trump. Not merely because of his republican views, but in defiance of corporate Washington, and to polarize society and speed up the secession of California. Marinelli is sure the US President will mend the broken ties with the Russian government.

Americans should widen their outlook

“I enjoy living in Russia because it gives me an opportunity to meet Russians and to study a foreign culture. In my opinion, the problem with Americans is that they do not travel enough, and if they do, it’s only Europe, Canada, the Caribbean and other US-like countries,” says Marinelli. “We should travel more and study other cultures different from our own, including Russia, a country we have had complicated relations with since WWII. I think the problem is the lack of mutual understanding and the deficit of information.

Luis went into politics partly for personal reasons – one of his family members was an undocumented immigrant.

“My spouse came to the US with a visa. We got married, but her visa expired before she could get a green card”, says Marinelli. “We hoped the US government would help us and millions of other Californians in the same situation with immigration reform in 2014.”

The immigration reform in the US did not happen because of political games in Congress, mostly by members of the Republican party.

Because of Marinelli’s unusual political position, his wife, who was born in Russia, is being persecuted, at least in social networks. Some of her opponents have asked the Department of State to revoke her green card and run an FBI check on Luis Marinelli himself.

My enemy’s enemy is my friend

I asked another question: how come the Yes California leader tried to escape the traditional American society, and landed in even more conservative Russia?

Also, while Luis and his colleagues are fighting for gay rights back in America, here in Russia the government is destroying the country’s LGBT movement at the legislative level.

Are you collaborating with the same people here in Russia that you are fighting in the United States?

The Golden State secessionist does not see any controversy in the current situation. He is probably using the good old rule, “My enemy’s enemy is my friend”. Although, considering Donald Trump’s political views, is today’s America really an enemy of Russia?

Excusing his collaboration with Russia, Luis cites an example of oil trade with Saudi sheikhs despite the issues with women’s rights in some Arabian countries.

Marinelli has stressed that his organization is not a real embassy but a “cultural mission”. But should the state indeed gain independence, the Embassy’s status might be recognized by the UN and other countries.

I remind him a Russian citizen who calls for secession of any Russian region would face up to 5 years in prison according to the law. 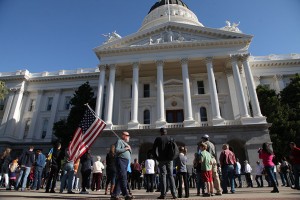 Luis replies that those laws do not apply to him – he is not a Russian citizen, and he calls for the independence of an American state, which is legal in the US.

“In Texas there were calls for independence as well “, says the secessionist.

Even if the Calexit gathers enough votes and wins the referendum, the secession would still have to be approved by Congress and the rest of the states – which does not seem likely in the near future.

One way or another, by this summer the Antiglobalization movement and the Embassy of California are planning to move to a larger office. They are gaining influence and will soon need more space for events and meetings.

Luis Marinelli and his associates plan to open embassies in Spain, Canada, Mexico and other countries.

The press conference is over, and we are escorted back to the checkpoint; either to keep us from getting lost in the dark hallways of the former classified research facility, or to prevent us from learning the secrets of the Soviet chemical industry.

White fluffs of snow turn the wet grey asphalt into a mixture of ice and mud. I go back to downtown Moscow, to the former Leningrad Hotel – yet another remarkable example of Soviet architecture that now hosts a Hilton.