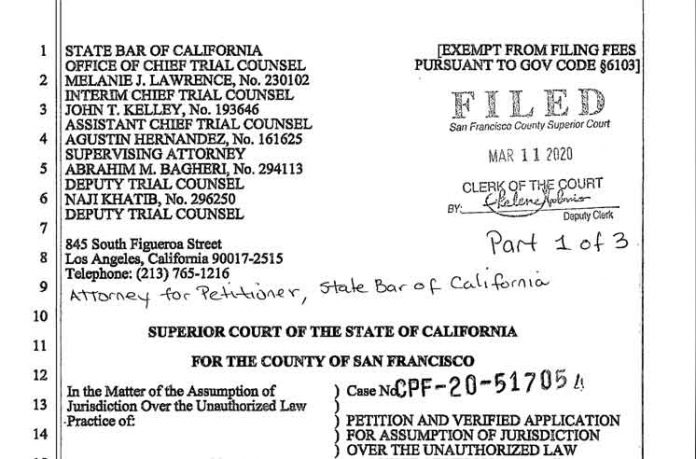 The State Bar of California grasped the unauthorized law practice of a woman from San Francisco who victimized immigrants from Russia and Mongolia, claiming she could help them with their immigration cases.

Nelly Allen, also known as Nelly Gabutti, Nelly Gabueva, and Ellen Allen, did business under a variety of names, including Alien Assistance Association, International Law Group, ILGSF, ILGSF Resources, and LDA Office Nelly Allen LLM. She told the clients that she was an attorney and had a proper qualification to practice immigration law. The State Bar also highlighted that Allen has never been admitted to the State Bar of California.
Allen denied that she was engaged in the unauthorized practice of law. However, the State Bar provided documentary evidence showing that clients were paying her thousands of dollars for her unlawful legal services in immigration matters, and the Superior Court of San Francisco County found that Gabueva was engaging in the unauthorized practice of law and granted a permanent order assuming jurisdiction over Allen’s illegal law office and enabling the State Bar to seize her practice.

Two of Allen’s former clients informed that they faced a real risk of deportation due to the false and incorrect information Allen provided on their asylum applications. Several Russian-speaking immigrants complained about the so-called immigrant lawyer, whose cases she was representing in the immigration court in 2015-2018.

One case refers to a couple of Mongolian immigrants who hired Gabueva as their representative at the USCIS San Francisco Field Office. When the couple arrived for an interview with an immigration officer, Gabueva not only failed to show up, but also falsified their asylum application documents. For example, in the questionnaire she indicated that her clients were religious refugees, professed Christianity, for which they were persecuted in Mongolia. According to the assurances of Mongolian immigrants, this was not true. For the case of “Christian Mongols” Nelly Allen took $8,000.

In another case, Nelly Gabueva took about $7,000 for representing the interests of a Georgian citizen, to whom she attributed a non-existent tumor and bisexuality in an asylum application.

“Immigration lawyer” Gabueva took from her clients from $4,000 to 8,000 for the paperwork on immigration petitions. The victims who demanded their money back faced threats from Nelly Allen, the court case says.

The court complaint notes that the USCIS tried to put down Nelly Gabueva’s practice of law back in 2008, but this did not lead to success.

The State Bar informs, that Immigration consultants can translate answers to questions on state or federal forms, obtain copies of supporting documents, and refer their clients to an attorney. Immigration consultants cannot provide legal advice or represent a client in court. Otherwise they are breaking the law and can be criminally prosecuted for the unauthorized practice of law. Considering this, on its’ webpage the State Bar gives explicit advice on precautions in order to avoid fraud.