In August last year, in the city of Blaine, Minnesota a terrible tragedy happened – a husband killed his wife, and then gunshot himself. In one day, 2 daughters and a son were left orphans.

According to relatives of the deceased Yulia Khort, on Monday, August 17, after a long day at work, she bought some food and went home. But at home something alarming was happening that Yulia, realizing the threat, kicked her daughters, Veronica and Victoria, out of the house and locked the door behind them. As soon as the girls were on the street, gunshots were fired. Their father shot their mother first and then he killed himself.

According to relatives, Yulia became a victim of domestic violence. Very often, the weakest become the victims of the violence – women and children (sometimes, men also become victims of domestic violence, but for some reasons they prefer to remain silent about it). Like many other women living in this nightmare, she remained silent and did not share her problems with friends or relatives, and did not seek help from the appropriate organizations. Probably, she thought and believed that her husband Maxim Krechetov, would change his mind and change his attitude and behavior – after all, he is her husband, the father of their children…

The recent heart-wrenching tragedy in the heart of Silicon Valley, in the city of Sunnyvale, shook California: father Leonid Yamburg killed his wife Svetlana Nikitina and daughter Yana Yamburg. Now he is under arrest. At the school where Yana studied, a memorial wall was organized in memory of the girl.

Therefore, if in relationships, at home where you are supposed to feel safe but you feel the slightest threat to yourself, your life, the life of a child, then do not be silent, do not tolerate and do not stay idle! This will not stop the abuser, and the price of silence may be too high. Nobody deserves to be abused! Moral, physical, sexual, economic, any kind of abuse is abuse, but not a manifestation of love and care. If someone hits – it means someone doesn’t not love at all!

It is important to understand that there are many organizations, people who are ready and want to help with psychological counseling, the provision of a shelter and the services of a lawyer, etc. Here you can find some useful information on where to go in California for a wide variety of help in case of domestic violence: 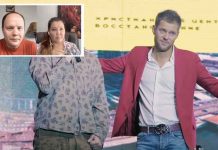