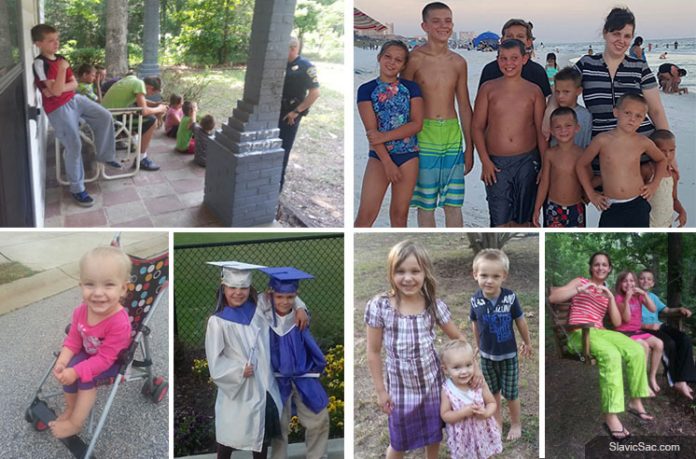 Andrej and Natalia Sokil, parents of a family with 10 children from South Carolina, are fighting to reunite their family, separated by the Department of Social Services (DSS). DSS was interested in this family twice before. The first time, in 2014, the children were in custody for 11 months. The second time 10-year old Sofia was removed on Oct. 21, 2016. She remains in custody as of today. According to the Sokils, both times the children were removed due to false reporting. Later, DSS created accusations to justify the family separation. If the court agrees with the DSS accusations without hearing the Sokils, all the children will be placed in shelters or foster homes. Even though such approach violates presumption of innocence, DSS insists that it is necessary “for good of the children.”

“The facts were extremely exaggerated. Family relationships, customary for most of the modern families, were shown in a false light. As a result, the family suffered significant harm. As it is mentioned, there is danger that the family will lose the children for indefinite time. I know that many families are hurt by DSS, and also by overemphasized stories in media. DSS understands that there is no real problem. We expect that they will simply create new accusations in a while to justify longer holding of Sofia in custody and receiving more governmental funds for such an activity, ”Natalia Sokil said to Slavic Sacramento.

The latest complaint, in 2016, was made by a school teacher, that reported to DSS that the mother killed and buried a baby. In reality Natalia Sokil experienced a miscarriage during the 7th week of pregnancy. This event brought sadness to the Sokil family because they wanted to have an 11th child. However, there was no violation of the law. Fetal death needs to be reported after the 20th week of pregnancy, not after the 7th. It’s impossible to understand how the accusations of the older boys of the family in the sexual molestation of their sister appeared in the DSS report and how this is connected to the miscarriage. Community representatives interviewed the Sokil children regarding these delicate relationships.

When talking about sex, preschoolers and elementary age children were completely unaware about this human activity. The older boys understand, but they are mostly focused on organizing their own life, in particular going to college and starting their own businesses. They plan to get married with the grown up young ladies from their church, when they become adults. The boys deny the accusations that they molested Sofia, and there are no facts suggesting the opposite.

Nevertheless, the family is concerned that DSS could create false testimonies, while questioning the children without their parents’ permission.

“One of the sons came home from school with heavy headache and stomach ache. He indicated that his food was brought from the back of the kitchen, while other students took their lunches from the front stand. Later he didn’t remember much. He suspects that he spoke many foolish things and inconsistencies during his interview with DSS, which occurred after this meal,” Natalia commented.

Recalling the previous case in 2014, the parents indicated that prolonged DSS custody (11 months) without cause made a significant negative impact on the children, who became unruly. They don’t obey their parents anymore, and treat them with rudeness and disrespect. The children threaten their parents with false reporting to DSS. The parents feel obligated to pay for an expensive Christian school to teach them manners again. Proper behavior goes a long way in society, and the parents care. Natalia and Andrej taught manners at home before. However, 11 months in DSS custody practically destroyed the demeanor of the children.

At this time the family needs about $60,000 to cover unexpected expenses, related to the DSS intrusion ($36,000 for correctional school, $12,000 for probation, $10,000 lawyers expenses). Initial tuition for the boarding school was $6000/month plus $2500 each month. That’s only for one child. In addition to home schooling, Natalia plans to enroll others to a boot camp which emphasizes proper behavioral development. All the money has been borrowed, but the family feels it is necessary as the damage created by DSS was very significant.

The first time Natalia and Andrej were arrested was in 2014, according to official documents. Press informed that the Sheriff found the living conditions of their home unhealthy, as well as that the children were covered in bruises. Andrej and Natalia were charged with three counts of neglect. Andrej, 50, and Natalia, 40, parents of 10 biological children, three girls aged between 2-15 and seven boys between 3-14, were accused in the failure of fulfilling their parental duties. The children were returned after 11 months in custody when the authorities learned that the family was not using welfare, so popular among immigrants, but was working.

As local TV-channel, WYFF, reported that the 15-year old daughter called, using a neighbor’s phone, and informed the Sheriff’s Department about battery committed by her father. According to the report, Andrej Sokil twisted her hand, trying to remove the cell phone and caused her pain. When a Sheriff’s Deputy visited the Sokil’s home, he found out that 10 children were living there. He saw the 14-year old boy with a large bruise, and the nine-year old with bruises and scratches. The policeman also testified that the youngest girl had skin damage and was surrounded by bugs, while in her crib. Also, police noted the lack of furniture and a multitude of insects.

The accusations were false.

In reality, the Sokils bought the house in Spartanburg in 2014 and planned to renovate it. Barely after moving in, the local media reported that the children slept in the attic without an air conditioner in it.

“Reporters didn’t explain that nobody wanted to lease a property to the 12-member family. Also, it was not the attic, but an additional recreation room on a second level (see pictures). Yes, the air conditioner wasn’t fixed at the moment of moving in. Why was this a crime?” Natalia commented.

Continue on next page