Yuri Seretskiy, an immigrant from Moldova currently residing in Sacramento, is going to run for Congress in 2016. Seretskiy, a former mayoral candidate for the city of Roseville, announced the news in an interview to Slavic Sacramento.

“The history of Slavic immigration in the USA goes back hundreds of years, but even today there are none of our compatriots in the American politics. In my view, this is unacceptable,” says Yuri Seretski. “There are millions of us, we all belong to the same culture – Russians, Ukrainians, Jews or Moldavians. We grew up with the works of Pushkin and Dostoevsky, Bulgakov and Chekhov, we were taught to respect our elders and honor our ancestors. Our grandfathers won the Great War, we launched the first man to space, we have a long list of achievements in science and sports… All this can be used to benefit the country we happened to choose as a place to live – America.”

In 2014 Seretskiy ran for Mayor of the city of Roseville and gathered 7% (2,557) of the votes, which unexpectedly put him in the 4th place. He also had intentions to run for Governor of the state.

“Immigrants from former USSR are probably the only people who have no representation on any level of the American political system. We are a minority whose opinion rarely counts, and this is very sad if you consider our achievements in culture, science and sports,” continues Seretskiy. “Everyone on Earth knows the name of Yuri Gagarin; it is hard to find someone who has never heard of Tchaikovsky’s Nutcracker, and so on.”

Yuri Seretskiy was born in Kishinev, the capital of Moldova, one of the former Soviet republics. In 1995 he moved to California at the age of 19. Currently he lives in Sacramento and does business in computers and construction. He earned a black belt in karate. Seretskiy is an associate of The Symbol of Success, a company that organizes record events for the Guinness World Records book.

In order to prove his honesty and loyalty, the congressional candidate is willing to pass a polygraph test, which has never been done before in a political campaign. 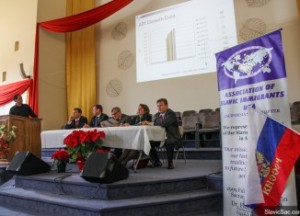 “I am convinced that the time has come for us to change the order of things and enter the American politics to use our cultural and intellectual potential,” Seretskiy said addressing immigrants. “I am convinced that there are decent people from former USSR who can fight, win and do much good as state governors as well as on all other levels of politics. It is a matter of honor and dignity for us, it is the question of who we are in this country. We must earn respect and make our opinion count!”

The future congressional candidate calls for all Russian-speaking immigrants to come together and win this election in order to “create a precedent and enter the big politics of the New World”.

“I am counting on your intelligence, conscience, and therefore your support in this election!” concludes Seretskiy.

The Congressional elections will be held on November 8th 2016. If Yuri Seretskiy wins, he will become the first Russian-speaking congressman in the history of the United States.